"Zebra Look" Accepted into Explore This 8 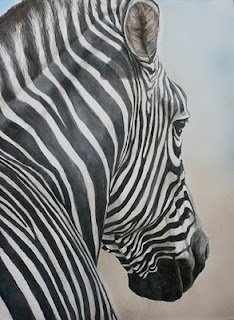 I was notified that this painting called "Zebra Look" was accepted into the Colored Pencil Society of America's annual international exhibit called "Explore This 8". This is an acrylic and colored pencil painting on illustration board. I completed this last year and entered it into the York Art Association's 41st annual Juried show and during the juring, it was declined. Then I entered it into the Hanover Area Arts Guild fall show and it won "Best of Show".
This is my second entry that was accepted into the Colored Pencil Society of America's show. The last one was in 2009 and it was called "Horse's in the Snow". Art competitions can be sometimes  disappointing and also rewarding.
Posted by Unknown at 9:38 AM