Millie Noback, left, and Sharon Benner, volunteers with the Hanover Area Arts Guild, discuss a painting this week at the guild's Carlisle Street location in Hanover. The arts guild is currently displaying selected items from the group's first-annual regional juried art exhibition. (THE EVENING SUN - BRETT BERWAGER)
"Art Gallery," the sign says, and you yawn your way right past and down the street.
Or maybe you don't.
This time, maybe, you stop, turn and let yourself be drawn up through a door. And then you're not in downtown Hanover anymore.
You're at the beach, and you wriggle your toes in the sand. The scattered, shattered shells scratch under the soft soles of your feet as you walk, and waves of churning froth pull at the shore. You hold up a hand to shield a blinding sun.
Or maybe you're standing in a fire-lit living room in fall, silent among the lapping shadows. You watch as a grandmother's chest rises and falls, wan but warm there under an old patchwork couch quilt. Her blue-lined, wrinkled hand twitches against the wool.

More than 100 paintings by area artists were recently chosen and put on display after the Hanover Area Arts Guild's first juried art exhibition. The artwork will be on display in Hanover through Aug. 27. (THE EVENING SUN - BRETT BERWAGER)
Or maybe you're smack in downtown anywhere, sweat wet against your back. In front of you a black man is sprawled across a bench, his clothes torn in pieces, slumped down under a soiled hat that says "USA." Forgotten Christmas lights hug the tree next to him; police tape blinks in the breeze. The stories are as wide as imagination, said Charlotte Yealey, written on canvas or in clay.
And they're right here in Hanover, said the president of the Hanover Area Arts Guild, adding if you come downtown this month, you can see some of them, too.
That's because right now more than 125 pieces of artwork are on display at the guild's Carlisle Street home, after winners were recently chosen during the group's first-ever regional juried art show. The event saw a flood of more than 220 entries earlier this month from as far as Lancaster and Baltimore, Yealey said, with well-known Maryland artist Wasyl Palijczuk in charge of choosing the eventual display pieces that hang downtown now.
Winners were selected and a best of show award was given -- a painting of Koi fish by Joyce Durkin of Lancaster County -- and cash prizes were handed out to those who excelled.
But perhaps more important than that is the statement that initial

Volunteer Sharon Benner, middle, moves a painting at the Hanover Area Arts Guild's gallery on Carlisle Street last week. Derek Altland, left, and Penny Groth submitted art for the show and spent some time browsing last week. (THE EVENING SUN - BRETT BERWAGER)
outpouring of paintings and other artwork made about the art scene in Hanover. "You see those newspaper articles about how there's no art, there's no culture in Hanover," Yealey said. "Well it's here. It's right here. And it's been here the whole time."
The arts guild was founded in Hanover in the late 1960s, by a group of local artists just looking to get together to paint and talk, to share their love for the arts and to try and spread the word locally. It began small, and it endured with the help of people like Yealey, who said she went to school for art and got away from painting for a time as she raised a family.
It wasn't long before she was back, though -- painting portraits of animals, mostly -- along with the other locals who had learned early on what it's like to see an artistic vision come to fruition, and to then have someone recognize it with praise or purchase.
Early guild meetings were held in the old Montgomery Ward building near Center Square, Yealey said, with membership growing and an eventual move to a spot on Baltimore Street near the old Kleffel's building there. More recently the group moved to a newer and larger site at 32 Carlisle St., she said, where artwork can be better displayed and to provide a now well-known home to local artists looking to learn.
"There's long been a lot of good art coming out of Hanover," she said.
But the artists certainly aren't the only ones to benefit. The guild's gallery is a boon to Hanover residents

Charlotte Yealey, president of the Hanover Area Arts Guild, speaks last week about the organization, which has been promoting the arts in Hanover since the 1960s. 'You see those newspaper articles about how there s no art, there's no culture in Hanover,' she said. 'Well it's here. It's right here. And it s been here the whole time.' (THE EVENING SUN - BRETT BERWAGER)
and anyone coming through downtown who's looking to stop off for a bit of culture, said Hanover Area Chamber of Commerce Marketing Director Melissa Speal. It's a quaint spot where it's easy to take a deep breath and get lost for a while. "When I first moved to the area I was unaware of the extent of the projects they do," she said. "But they really work closely with the schools and youth, and anyone can stop in and enjoy it."
And for a small downtown looking at a revitalization effort, Speal said, the splash of culture the guild brings to Hanover presents an invaluable draw.
"(Visitors) come back after a visit down there and just rave about the experience," she said.
Borough officials, too, have been singing the guild's praises

Millie Noback stands in the gallery of the Hanover Area Arts Guild on Carlisle Street in Hanover. The guild offers classes for young artists and is currently displaying art from its first juried art show. (THE EVENING SUN - BRETT BERWAGER)
recently, with the Borough Council considering a proclamation thanking the group for its hard work both with the show and through the years. "I think they should be applauded for all the things they do downtown," said Councilman Henry McLin. "This group has certainly long been a credit to our town."
Today the guild boasts more than 200 members, Yealey said last week, including some 150-plus local artists.
And organizers want to continue to encourage that history of growth, which is why they offer classes for young local artists, outreach programs to other local organizations and a solid presence in the downtown revitalization effort.
"It's always better to have minds focused in creative ways rather than destructive," Yealey said. "This is about spreading the word that art is good."
So the arts guild will look to build on past success. They'll offer even more instructional classes, and an annual art scholarship for one local artist. They'll remain a fixture in downtown events and the local arts scene.
And they'll keep proudly on display for most of the rest of this month 126 paintings and sculptures from area artists, for all to see and enjoy. Right here in downtown Hanover.
So stop in and see them, Yealey said, even if it's only for a minute. And even if a tour of the local art gallery isn't normally your idea of a fun side trip.
Because each framed scene or shaped mound of material is someone's work, she said, a person's story. Like that one there.
You look, and you're off again, awash in a warm breeze dancing with cottage curtains. A man leans back sleeping nearby as the afternoon wanes, a little dog curled on his broad chest, eyes shut, whimpering softly.
The tag beside that one reads, "Artist: Charlotte Yealey." It's her husband, Yealey says, painted from a picture taken one day as family children played nearby. That's what she was thinking about when she painted it.
But like any painting, she said, the rest of the rich detail is filled in only by those willing to look deep, those open to being suddenly, swiftly swept away.

More than 100 selected works of art from the Hanover Area Arts Guild's first-annual juried art show will be on display at the group's downtown art gallery, 32 Carlisle St., through Aug. 27. The gallery is open from 10 a.m. to 5 p.m. daily, except for Sundays, and is free to the public. For more information call 632-2521.
Posted by Unknown at 5:13 PM 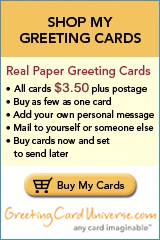